I'm Sorry I Hurt You So Much 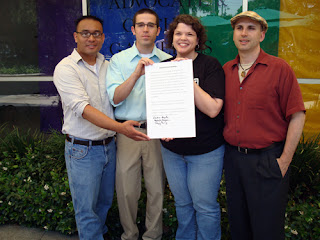 So my friends Peterson and Christine have been working like crazy over the past year (or more?) on putting together beyondexgay.com and planning the Ex-Gay Survivor Conference that is happening this weekend.

Today, there was a Press Conference at the Gay and Lesbian Center in Los Angeles, CA and I had the honor of being invited to be a part of it.

As reported by BeyondExGay.Com, "Three former ex-gay leaders issued public apologies for the roles they played in ex-gay ministries affiliated with Exodus International. They also shared portions of their personal stories. The event was covered by members of local and national news media including CNN and Azteca America."

I was honored to be among the ex-gay survivors who went up to receive and accept the apology letter. I was quite moved by the experience . . . .

After the Press Conference, we were all available for interviews. I was interviewed by the Advocate. I talked about my own experiences going through an ex-gay program. One of the things I shared with her (as well as with the reporter from the OC Weekly yesterday) was that I realized the mixed message that these ex-gay programs (and the Church) were giving me. The mixed message was that of God's unconditional love and the Church's conditional acceptance that was dependent on conforming to their interpretation or version of "wholeness".

God loves you. But we will ONLY IF you embrace heterosexuality. Even if you don't actually become straight, we want you to look straight (to us). 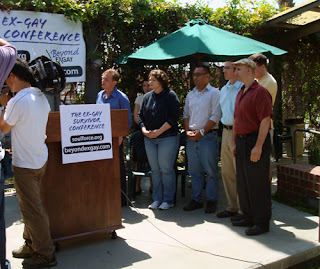 That's the kind of thing that fractures our identities. I mean, goodness, I attempted suicide before the ex-gay program because I hated being what I was. How much more damaging can it be after an ex-gay program affirms that self-hatred?

Oh but don't worry, at least God loves you.

They tell us when we enter the ex-gay program that we're broken because we're gay. I realized that instead, they were the ones who broke me further when they encouraged me to manipulate my personal and sexual identity.

Be straight. Or at least let me think you're straight.

Sorry! I can tell i'm getting bitter about all this! But that's why this Ex-Gay Survivor Conference is so important! People need to know how these programs can cause such trauma.

The experience at the press conference and accepting this apology from these ex-ex-gay leaders was surreal. I found that many emotions resurfaced from when I was desperate enough to try to be straight. I found myself close to crying when I shook hands and hugged them! If I can find the time to sit down and process things, i'll try to write up a blog to revisit some of those emotions.

In the mean time, please keep praying for me, the conference, and especially for Peterson and Christine as God continues to position them as a voice for "ex-gay survivors" like me.

Here's the text of the formal apology, as reported by Peterson:

As former leaders of ex-gay ministries, we apologize to those individuals and families who believed our message that there is something inherently wrong withvbeing gay, lesbian, bisexual, or transgender. Some who heard our message were compelled to try to change an integral part of themselves, bringing harm to themselves and their families. Although we acted in good faith, we have since witnessed the isolation, shame, fear, and loss of faith that this message creates. We apologize for our part in the message of broken truth we spoke on behalf of Exodus and other organizations.

We call on other former ex-gay leaders to join the healing and reconciliation process by adding their names to this apology.

We encourage current leaders of ex-gay programs to have the courage to evaluate the fruit of their programs. We ask them to consider the long-term effects of their ministry.

I love the real you.

hey--have you seen the film god and gays? a lesbian i know casually made it a year or so ago. good stuff.

I love you....the one and only you:) This brought tears to my eyese.

You're right in the mix of it all, aren't you? I know we've never actually met, so this is strange to say, but I find my self actually feeling proud of you. I hope that doesn't come across as patronizing or something, I mean it in the best possible way. Glad to see you're doing so well!

Hey Eric! It's Cindy (and Stacy) from the conference! It was such a blessing to meet you and get to know you there. You have such a vivacious and outgoing spirit, and warm heart, we're so glad you're working to reconcile Christianity and homosexuality! Are you going to the ECWR conference? We are! Also, we read a post from Siena and Toast! We are such huge Makena fans! Those of you reading this who don't know them, please google "Makena" or "girl meets girl" you won't regret it! They are beautiful and wonderful musicians/singers from Hawaii. It's such a small world, especially in the gay community, and we need to support each other in all of our challenges and successes! Anyway, we hope to see you again, soon, down in the L.B.!!! Peace and blessings to you, Bro, and God speed! Much love Cindy and Stacy from Temple City

Eric
I'm the founder/Executive Director of the Catalyst Network of Communities, a 501c3 non-profit social impact organization helping people and groups to connect, collaborate, and share resources. I established it in 2006.

Before that, in 2002 I was a co-founder of a faith-based non-profit called Kingdom Causes helping churches, church and lay leaders, and people of faith of diverse denominations to serve their city together. Then I began the journey of reconciling my faith and sexuality and eventually came out of the closet.

It's never about the answers we think we're seeking. It's always about the questions we are bold enough to ask ourselves. That is what truly shapes us.